This territory is among the least impenetrable on the planet and extremely dangerous. It is a thick jungle where there are no roads to go; it swarms with insects, dangerous animals and almost everyone should stay away from it just for these reasons. If you are looking for adventure, you have to look elsewhere! It is also frequented by paramilitary armies, drug traffickers, illegal migrants, indigenous tribes and everyone could be adverse!

The Panamericana is a mythical road that connects the extreme tip to the north of Alaska with the extreme head of Patagonia, which holds the record for the longest road in the world. This route of over 25,000 kilometers that crosses 20 states and 10 different ecosystems, was already thought of as a railway network in the nineteenth century and subsequently defined and built during the first half of the twentieth century. If you are planning to undertake this exciting journey by land, be aware that direct contact with all local tourist and customs administrations is essential before traveling, so that you can travel safely, combining it with excellent physical preparation.

It is also important to know that the road is interrupted for about 150 miles!

In fact, ten hours south-east of Panama, the Pan-American woman crosses the jungle, curls up in a path and dies near Yaviza, to rise again in Colombia near Turbo. Between the two countries there is a dense jungle called Darien, the largest of all the national parks of Panama, a vast and primitive kingdom among the least unexplored on the planet, with an area of about 6000 square kilometers. Furthermore, in this place there are no official motorized roads that can be traveled and it is populated by dangerous animals, for all these reasons it would be advisable to stay away from these places. It is necessary to take into account that the Darien is frequented by: drug traffickers, paramilitary armies, illegal migrants, indigenous tribes, and all these groups of people may not be favorable to tourism! If you are looking for adventure … go and find it elsewhere!

Since the Darien hinders all travelers by land between North and South America, it has earned the name “Darien Gap”.

The history of the exploration of the Darién includes many picturesque and disastrous episodes. At the end of the XVII century while the great European powers like Spain and England were intent on colonizing vast areas on the planet, the first country to attempt to explore the isthmus of the Darien was Scotland, which was in a difficult period both at political and economic level. An ambitious plan was devised to establish a colony called “New Caledonia” in the hope of establishing trade with the Far East. The expedition set sail in July 1698, with about 1300 people on board, who, after settling on the mainland, were hindered by the equatorial climate of the region, combined with a poor organization of the expedition. These factors soon caused the spread of malarial fever and the subsequent death of many settlers. In July of the following year the colony was abandoned and only 300 settlers survived and returned to Scotland on a ship. 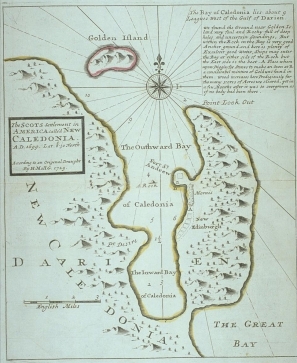 In 1850 the whole world imagined Darien as the site for a glorious canal linking the Atlantic Ocean with the Pacific (the Panama Canal had not yet been built), so Isaac Strain, a young ambitious lieutenant of the United States Navy, took command of an exploratory expedition in the hope of identify the final route through the Panama isthmus. Unfortunately the members of the expedition fell into ruin deceived by false maps of a fraudulent former explorer. The expedition faced two unmapped mountain ranges, hostile native populations and an ordeal of hunger, fatigue and disease, with the final desperation where some men conspired to commit cannibalism. The detailed account of the events of the expedition led by Isaac Strain is narrated in the book “The Darkest Jungle”.

The first vehicular crossing of the Darien Gap was made in 1960 with a Land Rover (La Cucaracha Cariñosa), a Jeep of the Trans-Darién Expedition, driven by Amado Araúz with 3 other people including his wife. They left the locality of Chepo in Panama on February 2 and reached Quibdó in Colombia on June 17th in 136 days. To overcome the jungle it was necessary to build bridges and rafts, covering most of the distance on the Colombian side by sailing along the Atrato river.

Nowadays, most travelers do not meet the Darien Gap, in fact in both directions you can take a plane or a boat to circumvent the 150 kilometers of unknown that separate the continent. If you are intending to circumvent the obstacle by sea, considering the direction Colombia-Panama: you will have to get to Turbo or Necoclì, and with a ferry head to Capurganà. From here (possibly from Sazurro or La Miel, reachable by boat or on foot from Capurganà) you will have to head to Puerto Obaldia. Then take another boat, and in 8 hours you will reach Puerto Carti, then overland to Panama City.

If instead you want to try the road by land, know that in the Darien Gap; you may have little chance of getting away from it, unless you are a survival expert in tropical and risk-loving environments. It will take a minimum of 7 days to walk over it, in a territory with a humidity rate of up to 90%. You will be surrounded by natural habitats that can range from: palm forest, wetlands, rocky coasts and mangrove rainforest. Considering the high percentage of marshland; there will be rivers to cross without the aid of boats and bridges, which depending on the season could have very considerable flow rates. The Darien contains an extraordinary variety of wildlife, including: tapirs, anteaters, various types of monkeys, and is considered among the best areas in the world for birdwatching, in fact you can see an incredible variety of birds including very rare Harpy eagle and various species of macaw parrots. Among the less friendly fauna we can find: crocodiles, caimans, jaguars, various species of snakes including the Terciopelo (Bothrops asper), the viper that takes the most victims in Central America. Among the many amphibians that live in this area you can come across the Golden frog or arrow frog (Phyllobates terribilis), a toxic species, whose skin is covered by a poisonous plant-based alkaloid that was used by the ancient Indians to build poisoned darts for to hunt. Among the insects there is no shortage of mosquitoes carrying Malaria, Yellow Fever and Dengue, the painful fire ants and the Botfly anthropophagous fly (Dermatobia hominis), which give the eggs their particularity on the skin of animals or humans, creeping into the subcutaneous tissues in the body of the guest who acts as an incubator.

The Darien Gap is also the stronghold of Colombian paramilitary armies such as the FARC, (Colombian Revolutionary Armed Forces) and the ELN (National Liberation Army), which after the cease-fire in June 2016, practically ended the civil war in country that began in 1964. In the conflict the two opposing political nucleuses were: the Colombian state, which still represents the urban and richest part of the country, and the paramilitary armies composed by the most rural and poor part of the population that still lives by expedients, including the cultivation of the coca plant. The FARC is infamous for the recruitment of minors among its ranks, it is estimated that more than 4000 minors were part of the army, in addition to the thousands of soldiers already enlisted. For the recruitment of minors the children of peasants who lived in the most remote areas of the country were usually chosen, who were attracted by deception with false promises of money of an easy life. Once enrolled, the young recruits were trained to fight and kill, and punished with death by shooting in the event of desertion. These paramilitary armies are partially financed by drug traffickers who control the territory and use the rivers and docks that connect the Gap marshes as corridors for the transport of drugs, and sometimes kidnap those who are adventurous enough to enter the Darien. There are more than 70 seizures and requests for redemption in recent years.

Many migrants also cross the Darien Gap, coming mainly from Colombia to reach the southern periphery of the jungle with relative ease, due to the permissive immigration policies of some South American countries. The first stop is often Brazil, which enjoys a favorable law on reciprocal visas. The largest groups come from the Middle East and central Africa, but also from India, China and Nepal. The vast majority of extra-continental people are young men in their twenties and thirties who flee their country of origin due to political upheavals that cause wars and extreme poverty, or by natural disasters also caused by climate change. They try to cross borders even illegally, hoping to enter the United States with the aim of building a new life and sending money to their families. Very often, once migrants arrive in Brazil, they do not have a fixed plan for their next trips and must calculate the route to the north by themselves. They do it using their ingenuity, their little money, information from friends who have already made the trip (most commonly received via WhatsApp messages or Facebook posts), by accessing a freely affiliated network of smugglers who find along the way known like “Coyotes” who with a few hundred dollars act as guides through this difficult territory, where the physical commitment of trekking is the greatest challenge.

Periodically some Colombian presidents approve the project for the construction of the road that would cross the Darien national park, which can be traced back to drug trafficking pressures that would make drug trafficking easier. I think the convenience of crossing the American continent with a road, the economic benefits it can bring, cannot be bartered with the precious biodiversity of the area and respect for the native native populations of the Embera, Wounaan and Kuna who have always lived in this place.