The worship of cargo ships, more commonly known as the “cargo cult”, is part of a social and religious movement of the inhabitants of Malanesia, a group of South Pacific islands to the north-west of Australia, which includes Papua New Guinea, New Caledonia, Fiji and Vanuatu. The cults of ships and cargo planes began with the growing tension between the remote tribal populations, and armies engaged in the war in the Pacific. 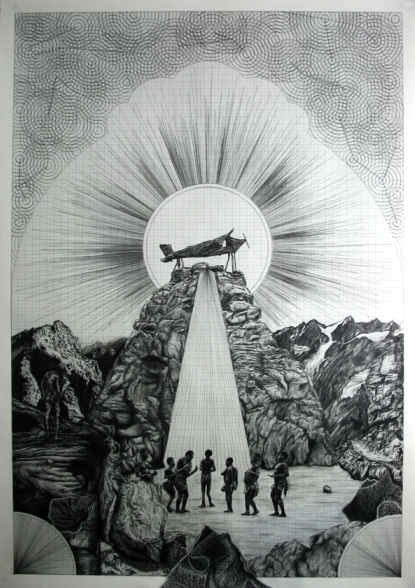 The members of these cults believe that:

1) The whites have stolen from God the secret of the production of fine materials.

2) That such goods will be delivered to the believers from ships, aircraft and even rockets at no cost.

3) That what ‘will be’ made possible by the advent of a messiah.

4) That when this happens, they will no longer be forced to work.

5) That the assets allocated to them will be accompanied by their deceased ancestors.

6) That instead of a white government there will be an indigenous government.

Between the first and the second world war the natives began to consider how the Americans and the Japanese people that they would be freed from the dominion of the British and the French. Towards the end of the 30 s, hand in hand which increased international tensions, he made his way a new form of this cult, led by a native messiah, John Frum who preached that soon the islands were visited by ships American cargo. His prediction came true in 1942, when they reached the ships of the American Navy to conduct the war against Japan. What caused a sensation among the islanders. The Americans obviously were far ahead of the British and the French from the technological point of view, the indigenous workers paid more than they would pay the Europeans, and the American navy consisted of men of color; and for the natives it was evidence that blacks and whites could learn from producing consumer goods in profusion.

There is a variant of the cult of John Frum ” The movement of the Prince Philip” widespread among members of the tribe Yaohnanen, in state of Vanuatu. The followers believe that Prince Philip, husband of Queen Elizabeth II of England, and the white son of a spirit of the mountains, they were talking about their ancient legends. He was also the brother of John Frum.The figure of Philip is then superimposed on that of the son of the local deity, who, according to local tradition, he traveled overseas and would have married a woman of great power. These beliefs were reinforced by the fact that the islanders were able to see the great respect that the British officers stationed on the island observed at the Queen Elizabeth: what led them to conclude that Philip was the son of the god they were talking about their ancient legends.https://www.youtube.com/watch?v=2SQBuweNByk

After World War II, many members of the cargo cult of organized non-violent demonstrations, and it gave much trouble to their European overlords. When the French and the English ousted their leaders in prison, the natives were convinced that their beliefs were shared by whites, which otherwise they would not be considered dangerous. To prepare the paradise “immediate”, they refused to work, stopped you treat their orchards, killed their pigs and destroyed their food supplies. They built docks, warehouses and airstrips for the infinite amount of goods that would have rained from the sky. As part of this cult took place in 1964, an incident which was widely publicized 100 indigenous dell ‘island of New Hanover, a small British protectorate voted for Lyndon B. Johnson as their representative to the board of the local government. Because Johnson did not show up, the Islanders picked up $ 1,600 to buy it and built a fake airfield to attract his plane.

Christianity has had a significant influence on the cults of cargo ships, when in also speaks of a Messiah and the coming of a millennium. Even the most objectionable features of these cults, such as the refusal to work and the sudden consumption of resources, were recommended by Jesus, who believed that the millennium was imminent and that he said, for example:

” Look at the lilies of the field grow peaks; they do not toil, nor spin. “

The Melanesian situation makes it easier to understand some elements of this cult, who argues inter alia that the version of the Bible is widespread in Melanesia incomplete. According to the natives the biblical descriptions of revelation from God of the magic that produces material wealth are kept secret by the white man. in fact, the missionaries actually make use of Bibles incomplete, but only because the translation of the whole Bible in the various indigenous dialects would be impossible. The natives are told that their wealth whites get it with hard work, but whites who live in those islands work less of the natives. Since 1966, however, the cult has taken on a more practical attitude. It is organized in association dedicated to the development of agriculture and has invested capital in a plant Anglo-Australian copper island of Bougainville, in the Solomon Islands.

On 27 September 2007, five of the islanders of Vanuatu visited the UK. During their stay, they met Prince Philip to whom, with the question: “The papaya is ripe or not?” Asked when he would return to the island, as provided by the prophecies. Philip replied to this question: “What the papaya is ripe or not, tell the boss that Kawia now it’s cold, but when it gets warm send a message,” letting them know that the time was not yet ripe.

The journey to the discovery of the five islanders of England has been the subject of the documentary “Wild at whom?” (Original title “Meet The Natives”) produced by the broadcaster British Channel 4 in July 2012 .

Interesting articles that speak about the same topic:

21 thoughts on “The strange cult of cargo ships”